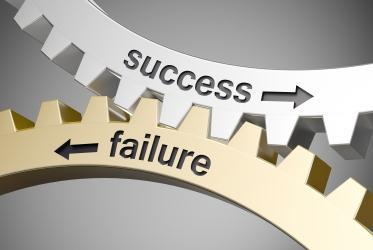 Get The Sandler Rules for Sales Leaders in our online shop or purchase your Kindle version on Amazon. It is the definitive resource for effective sales leadership, based on the proven principles of the Sandler Selling System.

I-10's learn from failure. Wow, I'll tell you what. This rule is action packed with Sandler philosophies and tactics. First of all, we have to embrace failure. Everyone's going to fail. You failed when you were a kid learning how to ride a bike. We fail in all the different roles that we have throughout the day. It's going to happen. When people run away from failure, they're running away from growth. They're running away from success. We've got to understand that failure's going to happen. That's one. Second is we've got to make sure that we protect people's self-esteem. Because sometimes people on our team will confuse role failure with self-confidence, self-esteem. Self-concept failure, two completely different things. Your salespeople and you as a sales leader should see yourself as an I-10 self-concept. I'm an 8, 9, or a 10. That's a winner. I see myself as an I-10. It doesn't mean you're arrogant, that means I have a healthy self-concept.

My roles, do I want them to be a 10? Of course, but I've got a thousand different roles in my life, parenting, CEO, this, and that. There's a million of them. Am I going to be a 10 on everything? No. I must understand, you have to understand, that if I am an R-2, I failed in one of my roles, it does not affect my self-concept, my self-worth. Because, if I allow it to drag down how I see myself, so it's even because people can only perform in their roles as they see themselves self-concept wise. That's the rule that you're going to learn a little later. If I drag myself down, then I'll never risk. I'll never fail. Risk and failure go together. If you make sure that you and your people see yourself as an I-10, they will risk, and they will fail, and it’s okay because I'm going to learn from that.

Here's the second thing. Institute the three P's in your leadership style, and people will be okay with failure. Potency. When you talk to people, you want them to own up to what's going on so you can help them, make sure that you're on even's keel. Don't use your business card. Right? Just talk to me. I'm your coach. Permission and protection. Permission, give people permission to fail and give them permission to tell you the truth. When I worked for David Sandler, he told me all the time, "Tell me what's going on. I give you permission to tell me the truth." I thought that was so ridiculous when I first heard it, but it was the greatest thing that he could do for me. Why? Because, when I messed up in one of my roles, I had the self-concept to say, "He gave me permission to tell him." I didn't have to hide it, so I owned up to it. I said, "Here's where I messed up." He said, "Okay, great. What did you learn from that?" "Well, I learned -" "What you have done differently?" "Well, here's what I would have done."

The failure happened less, and less, and less, because he gave me permission to speak freely. He protected me, which is the third P. Protected me, it's okay to fail. Protected me that when I told him the truth, he wasn't going to use that against me during my performance review or my raise. Those three P's will help. The bottom line is, you can't have success without failure. The more that you embrace it. The more that you celebrate it and don't poo-poo it at sales meetings, the better off you're going to be. Good luck.

THE SANDLER RULES FOR SALES LEADERS details a sales management process that works. It offers 49 timeless, proven principles for effective sales leadership, based on the Sandler Selling System. The book is the sequel to the Wall Street Journal bestseller THE SANDLER RULES, also authored by David Mattson.

David Mattson is the CEO and President of Sandler Training, an international training and consulting organization headquartered in the North America. Since 1986, he has been a trainer and business consultant for management, sales, interpersonal communication, corporate team building and strategic planning throughout the United States and Europe.

David is the author of the Wall Street Journal bestsellers, The Sandler Rules: 49 Timeless Selling Principles and How to Apply Them and Sandler Success Principles: 11 Insights that will change the way you think and sell. He regularly authors articles for business publications and continues to be involved in the ongoing creation and development of new Sandler training products and programs.
Share this article:

Maintaining Sales Motivation: Why Do You Work?

What motivates you to be the best salesperson?

The Power of Mindset