How to Take Back Your Life with Time Competency 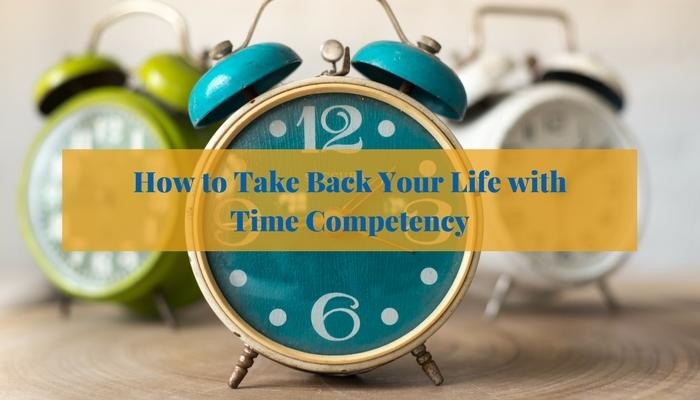 The first thing I needed to figure out was that who I am is not what I do. I validated and proved myself by my interactions with clients and prospects. My identity was so tied up with what I was doing that I continuously had to do more to prove myself. At the time, my identity was my role and because of this—my identity was defined by performance and I needed to perform more.

The quest for matching performance to the validation of self and others was crucial in getting time back in my life. It was a learning lesson: I wasn’t believing in myself, my ability, and my future. I felt I had to earn confidence, rather than understanding that confidence is something I bring to the table—not something that I earn.

I needed transformation. And transformation doesn’t come from by working harder. I continuously did the same thing over and over expecting new results. I worked incredibly hard to get ahead, a hamster on its wheel, waiting for a breakthrough that was deserved and would take place once the right switch was flicked.

In buying Sandler’s material, what I was buying was ongoing reinforcement; I was buying a mentor and a coach; I was buying someone who believed in me, and through that mentorship and coaching I was buying an investment in myself to work on what was happening between my ears that had taught me to sabotage myself to get my needs met.
We’re a top franchise in the organization and became that way through understanding the keys to selling more in less time at higher margins. Those fundamental keys are focusing on attitude, behavior, and technique. In order to do this I had to build a new belief system and new pattern that was important to the success which I wanted and knew I deserved, but now saw a path to do it that was distinctly different from the status quo—rather than guessing toward the future, I built a plan which led itself to more time, more success, and more profit in my personal life.

The more you engage with the resources that we provide, the more you may come to hear the self-reliance pieces of our road to success as seemingly repetitive. Do not be deceived into thinking that fixing some of the issues you have with your mind will be an easy task. In truth, it is a life-long journey to correct the corrosive thoughts which stagnate and can have become malign.

Too often we have aggregated and built on beliefs that limit our success because we function in a soft shell of preprogrammed responses to feelings, intuitions, and situations. Often when we experience something with residual correspondences to our own past misgivings we can trigger uncertainty which becomes self-fulfilling. And typically, in our engagements, self-fulfilling means not that it is preordained, but rather, we act under the guise of the expectations similar to the previous outcome, not to the desired outcome.

So how do we fight against the tyranny of the mind? John Milton wrote, “The mind is its own place, and in itself can make a heaven of hell, a hell of heaven.” The resonating truth of that statement does not atrophy with age or time, it solidifies into ingrained perspective. To fight against tyranny is to accept the daunting task of training yourself to behave and think in a manner which coincides with the success you envision.

Are you a great leader of your team? Yes, you are. Are you a competent human that builds trust through personal conversations and invests time to make sure both you and your prospects are embarking on a relationship that is best for both parties? Yes, you are. Are you content with the same mistakes building into a deluge of another year of business and financial insecurity? No, you are not.

Awareness is key to beginning this journey. There is no tincture which endows the consumer with freedom from the problems that we create for ourselves. Be mindful of how you speak with yourself. Be mindful of your physiological and mental reactions to what you hear from prospects or clients. Get very clear on your values and build a foundation which will create equal business stature and alleviate the struggle caused by these self-limiting beliefs.

The majority of the time I spent in my early career was following the traditional sales approach. I would meet with clients and present what I could, would, and what they should do with their projects in order to impress them and validate some of the needs I felt met when I was demonstrating my skill and competency with my work. This led to a barrage of issues with clients who may have been interested but weren’t ready for the amount of information I was bringing to the table.

I spent less time with more prospects than I currently spend. And why is that? I discovered that the majority of the time I spent with prospects, they were either unqualified, unready, or uncommitted to me. Having a crystalized conversation on what the obstacles are that we’re looking to solve, what money, resources, and time has been set aside for the project, and what level of commitment to the project the individual has upfront provides a fantastic framework for a good use of time.

I was fed up with overworking myself and being let down and feeling as if I was letting my family and my team down every time a sales opportunity went south. I learned how to disqualify prospects and became very clear with my internal clients and employees what were the qualifying attributes that were related to people who we should disqualify. My team got very clear on who we should disqualify and because of that we experienced a marginal decrease in leads, but a massive swing in closes. We stopped not looking for anyone and started looking for the right people. If you’re looking for anything then anything can look like everything. If you’re looking for something, then anything looks like what it is.

3. Change my Belief System about my Marketplace

Another key to changing my belief and perspective was taking responsibility for how I felt about my marketplace. I may have been born an optimistic person, but the programming from my parents and environment removed a majority of my anticipation of the future and success. Instead, for the majority of my career, I found myself in a purgatory waiting for my success to come and my market to fail.

I believed in my company to the extent that I could control everything in it. I expected that success would only take place if I made sure to curb all the ways that failure could come. What I did, similar to my environment, was create a business with little failure and little leadership. I micromanaged and started fires in other people’s work so I could put them out. I did not mean to disallow growth from project managers, but I did that by usurping their authority and looking over their shoulder.

I needed to change my belief about my marketplace from a dark and pessimistic perspective into something that looked at the future as an X on a map—achievable and measurable; located where I set it down. I needed to define what success looked like for me, see how it would be achievable in my market, and understand how my business was the most qualified business in our industry to get there.

It’s never that in your marketplace you have to validate your belief structure because when it comes to validating beliefs, we take whatever evidence is credible to our perspective, and morph it to fit our needs. Rather, we must become responsible for the belief we maintain and these beliefs need to be proactive in terms of our market and our perspectives of ourselves in that market.

We must be responsible and take ownership of our own best interest. We must take maintain equal business stature and ensure that prospects do not see us as vendors. We must learn to be good at problem-solving—listening to problems, but not fixing them. We must maintain a belief in our ability and desire to lead a sales call rather than following along with one. We must own our strategies and tactics to mirror and match individuals in order to demonstrate our likable and approachable features. And we must learn to be process oriented. Selling is a system, if you are winging it, it will be more about you than your prospects. The more you know about where you are the less you will worry about where you are and focus more on where your prospects are.

If you’re interested in learning more about what a relationship with us would reachhttp://www.crossroads.sandler.com/guide-to-achieve-success out to via email at Jim.Stephens@sandler.com. Look forward to hearing from you. Good luck with the crucible ahead—the rewards are exponential.