Your Coworkers are Your Internal Clients 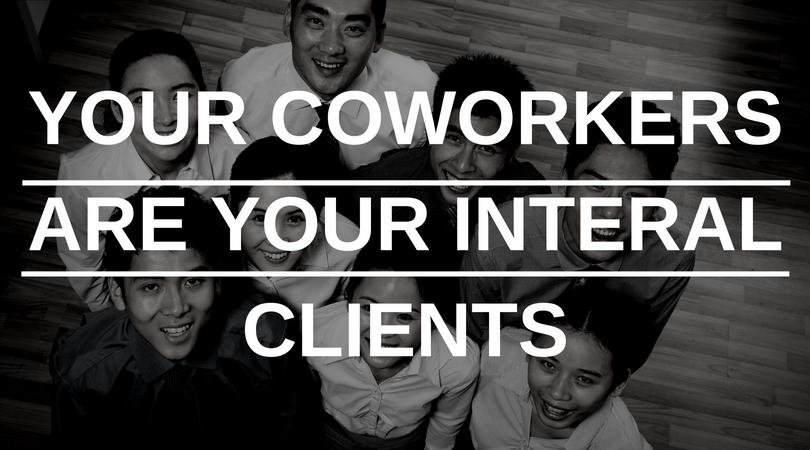 Who We Are is different Than What We Do

Your roles in life take various forms. We all have a lot of them and sometimes they coexist simultaneously. You may be a father, a mother, a son, a daughter, an owner, an employee, a coach, a mentor, a mentee, a doer. The list of nouns that define what we do feels endless when we try and categorize and separate it all.

But, we need to separate it. Who we are is not what we do. We can have deviation in our role performance; we must be firm in understanding our value as who we are. Any distinction that you can draw up which undervalues yourself compared to others is a means to bruise yourself worse than you deserve. When it comes to the internal monologue that we carry in our day to day lives, we are the observers of our inner voice; not the manifestation.

Why is This an Issue?

We see our coworkers every day. We grow to appreciate the nuances of their personality and we see a myriad of roles that they perform. They may have a simple job title, but we know from experience that they are not simple—far from it. We see the complexity due to our proximity and are liable to start seeing what they do as who they are. The more we see them in a multitude of roles, the more we make the mistake of seeing what they do as who they are. As if each piece of a role represents an inherent quality of them as a person. This is far from the truth.

Their performance in roles, if unrecognized, tricks us into seeing their roles as who they are. A healthy work environment shares the benefit of the doubt that actions done in roles can be held accountable and valorized for better or worse. It is not that Jane is saving the day because that’s what Jane does; Jane is very good at her role. Nor is it another issue caused by Steve because Steve doesn’t care. Steve is competent in a lot of his roles, when he takes over for other people’s roles though, he is not, nor should he be, expected to perform at 100% when it is not what he is most proficient at.

This can be a disaster. If we take what people do as a means to determine who they are then we set ourselves up to value them less than what they are worth on the basis of what they have done. Our inherent value as humans is nonnegotiable; if we are fluctuating the value of others based on what we see them do, we not only set the relationship on thin ice, but we also justify our own devaluing of ourselves.

If we see coworkers as clients then we are liable to see them in the role that they perform and what we need them to accomplish. Too often we become comfortable with our coworkers to the point where we make exceptions for them and expect them to make exceptions for us. Everyone has a rough day now and then, but a continual expectation of better treatment can set the scene for a polarizing engagement where both parties expect better treatment simultaneously and are building up a pool of debts.

In the past people would collect stamps to cash in and this is what we allow ourselves to do in the workplace. We collect stamps on the actions of our coworkers and how we treat them versus how they treat us; all this devoid of expectation in pursuit of our own self-interest. Rather than constantly collecting stamps and allowing a feud to exist in the subtext of work, much better to hold expectations clearly and act in accordance with the manner that you expect others to act.

One Sandler rule, the platinum rule, may go even further. Treat others the way they would treat themselves if they were you. It is not about you, it is about them. Is it in their best interest if you hold them to a higher standard because you understand their value and have seen their excellence? The way you approach others sets the standard for the engagement. Imagine if you approached others from your role to their role. Would that make a significant difference than taking for granted that they understand you are coming to them because you have a job to do?

Here’s a list of some of the common complaints we hear about people with their coworkers. Do any of these resonate? What do you when you have to deal with this?

Often when we come to a company and engage them in hopes of providing help we look at the symptoms that define the culture. Which of these symptoms resonate with you? What do you think is the underlying reason for them existing? If you had a magic wand that you could wave to solve any issues at your work what they be and what would the solution look like?

Reach out to me—I’m always curious and hopeful to help! Jim.Stephens@sandler.com Have a great week and remember—if you measure it, you’ll manage it.

Tags:
coworkers internal clients i/r theory success2018 how to drive change company culture what is your culture who are your people do you have an team
Share this article:

How to Lower Stress in Sales

Sales Pros Have to Practice, Too